Galen Geer
I am a former US Marine and I am a Vietnam veteran. Also served in US Army. I am an avid angler and hunter and my fishing/hunting trips become the basis of much of my writing. I am divorced, I have three step-children from third marriage and two children of my own from my first marriage. My MA in English is from the University of North Dakota.

Cold is baaack and Africa

The cold is back. Sort of like “they’re baaack.” Here in North Dakota they like to say they have a January thaw that tricks you into thinking winter is going to end, and then it returns with a vengeance. The commonly held belief is that the winter thaw (that’s what they call it) melts some of the snow and relieves the pressure on the rivers to reduce the possibility of spring floods, or at least reduce the amount of flooding. So, I guess we had a winter thaw, although I don’t think it thawed very much, and now we’re back into winter’s merciless grip and the threat of some serious flooding is really something to take very seriously. At least most of the little town where I live is above any flood plain, ever overland flooding (that where run-off floods the land) so we’re safe from that. What I do have to worry about is the spring melt around my house being serious enough that it digs out part of a weak wall in my basement. I’ll be keeping a watch on that this spring. In the meantime, while I ride out the second stage of winter, I’ll be burning more firewood in my stove and trying to cope with more of wicked winter.

One of my mistakes that irks me is I missed the spring turkey license deadline. I had planned to get out and fool one of the toms that I’ve seen down by the river but I screwed myself this time. On the other hand the spring goose season is going to be open for business starting on Saturday and I’m looking forward to that. When the snow geese begin their northern migration I’ve actually seen the flights stretching from horizon to horizon. It’ll be a fun time and an excellent opportunity to improve my shooting form with the muzzleloader shotgun. At the SHOT show I was given some instruction on how to pass shoot the muzzleloader and how to make better use of it over decoys. My “sort of” dream with the muzzleloader is reach a point of about 60% kills when I shoot. Maybe it is too much to ask, maybe not, but spring goose hunting should help me toward that goal. With that in mind I’m going to start pre measuring my loads.

One of the magazines I write for is African Expedition and they recently launched a new promotion that I am going all out to promote and it is called “Revolution” and it is focused on how hunters really are the source of conservation. This is coming right out of Africa and the publisher means everything that he is writing. Those of you who have an interest in Africa should read this magazine because it is packed with a lot of stories and useful information. But not all of the magazine is on hunting, the magazine's editors are always on the lookout for nonhunting stories that the readers will enjoy. I admit that I am really supporting this magazine and I love the "Revolution" campaign because it speaks about hunters in an "in your face" way that has never worked before. This one does. Below is some contact information and their promtional poster. You can expect to start seeing this poster at any event where outdoor writers gather and even a few other places and yes, if you would like to get a poster to hang in your office they are going to be making them available, I think the largest size is 11x17 and there are plans to print full size posters later this year. 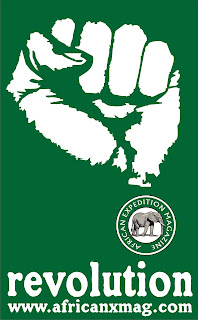 Hunters and adventurers everywhere have had enough.
We are starting a revolution.
Ethical hunters and adventurers have always been green.
So here it is - a magazine that speaks for hunters who actually admit: "We have been conserving nature all along. So sue us."
Join the read revolution. Now previous African Expedition issues can be read online - and you can flip through the pages just like a book.
Now you can save paper and have fun.
Spectacular articles, incredible circulation and superb presentation. African Expedition Magazine.
"Who's like us? - Pretty darn few". Chimp from Babe: Pig in the City
http://www.africanxmag.com/

Have a good end of week. glg

Finding a Memory of a Hunting Dog