Galen Geer
I am a former US Marine and I am a Vietnam veteran. Also served in US Army. I am an avid angler and hunter and my fishing/hunting trips become the basis of much of my writing. I am divorced, I have three step-children from third marriage and two children of my own from my first marriage. My MA in English is from the University of North Dakota.

Amtrak and the hunter 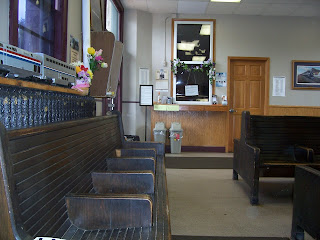 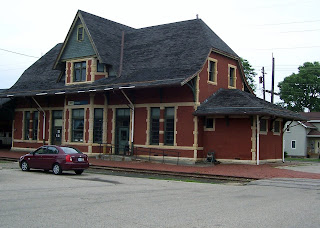 Last week and over the weekend I went to the OWAA conference in Rochester, Minnesota. I presented a seminar on the philosophy of outdoor writing in the 21st century. I think my presentation went well and it was well attended with a full room and some good comments and questions after the session.

To get to and from the conference I took the Amtrak from Grand Forks to Winona, MN and then a shuttle from the Amtrak station to the Kahler hotel (across from the Mayo Clinic). The trip was pleasant, both ways, and I managed to get a good night’s sleep on the train so that when I reached the conference I was ready to go and when I returned home, the same. I did have to spend an hour in the station waiting for the shuttle to take me to the hotel but I used that time to take a few photos of the station. Sitting in the station after the other passengers had been picked up I looked at the old benches could imagine the people who had passed through and worn down the wood of the benches. The station itself, an old brick building that needs some repair, has all the wonderful glow of the golden age of train travel. I hope the Amtrak leadership has the sense to preserve the building and not try to “improve” things by tearing it down and building another one of those intolerable, ugly, personality free tombs they have built to replace the “aging” stations.

Amtrak has some personality problems with its management and creative people, and it is lacking a couple of routes that could make it a much more desirable transportation system, but just because the dog is old doesn’t mean it isn’t still a good dog.

I enjoy travelling by train much more than I do by air. Airports, although they are full of all the amenities to make the travelling experience more bearable, they are too big, too noisy and everything is way over-priced. Train stations are, by contrast, rarely as well maintained, rarely offer the travel amenities and since it is sometimes a challenge to work out a train schedule that gets you where you want to go without a long layover a lot of people refuse to travel by train. For those of us who hunt there is another problem—Amtrak will not allow firearms to be checked as baggage, even in locked cases that are locked in the baggage car! It is a short-sighted rule on Amtrak’s part and I have heard there are some efforts to lobby congress to force Amtrak to drop the rule but I haven’t followed up on it. The other problem is that you can’t take your dog on the train, even (again) in a locked crate that is checked. With a little planning on their part they could make an accommodation if the dog had a bark collar and a muzzle (if that’s their fear), was in a crate and the crate was in the lower level area (with the owner). I can remember when animals were allowed to travel by train in the baggage car so I know it hasn’t been “that” long ago unless I am older than I think I am.

I hope the rule can be changed. I’d like to take the train over to some places where I could hunt different species of birds and it would be a lot easier for me to visit my grandkids if I could put Cookie in a crate and take her. Even if she did have to ride in a crate she would rather go with me than be left behind. If I add up the cost of either putting her in a kennel or hiring someone to take care of her when I am gone for a week or more a ticket to take her with me would cost less.

I am sure that to some people the whole notion of being able to check a gun case or take your dog on the train seems trivial compared to other issues. It is not that easy. This is our country and as hunters (and anglers) the transportation system is there to serve us—as in the consumer and taxpayer—hunters are consumers and taxpayers. I don’t know how many hunters would take a train from where they live to a Rocky Mountain or other western state for a guided big game hunt or a week of bird hunting, but I have a hunch that with the problems of plane travel, the numbers might be higher than one suspects. I get angry when I realize that we are being treated as second class citizens, yet we are expected to pay most of the bills for the wildlife management throughout the ski areas and other “playlands” where the trains travel and promote vacation packages.

I love to travel by train. Next month I’ll be taking a cross country trip with my son and grandson, from California to Chicago, and the month after that I’m taking a train to the POMA conference. When I think about how Amtrak is screwing the American sportsman and woman I begin a slow burn. We deserve better. After all, if Amtrak can build special racks in their coastal train so they can haul surf boards and bicycles I really believe they could think of some way to accommodate the men and women paying the biggest part of the bill for the nation’s wildlife.
Just a complaint that I had to air while I am thinking about it.

Well said. Let's hear it for the train.

I always go by train to france, loads better than hiking out to an airport way out of the city and then doing the same thing at the other end.

I remember M. and I watching one of the "Thin Man" movies, with William Powell and Myrna Loy traveling on a packed passenger train during WW2--with their terrier Asta, who somehow gets out of the baggage car and is with them -- and us thinking, "Why not now?"

As to the guns on Amtrak, at least one senator thinks like you do.

If you want your dog on the train, you'll need to get the FDA to change their minds, as they are the root of Amtrak's animal prohibitions.

Well guys, if the law sticks, as I read what Chas linked in his mssg. then just maybe there is hope. So, now I guess we turn our attention to forcing the Feds to make a change. Maybe I smell one aspect of the article about outdoor writers on the road, on which I am trying to work! glg

With the fact that they're receiving federal funds, I'm all for forcing the new rule regarding firearms (if they were purely private, I'd feel differently). Not that it matters that much, but if Amtrak permitted the passage of firearms, they'd be my preferred method of travel for my Colorado elk hunts. I'd probably consider using them for other hunting trips as well. I HATE air travel these days, and driving is getting expensive.

Phillip,
I am with you. It would be a bit of a PITA to take the train to Colorado from here but I'd take the train to Colorado for elk hunting--if I can still elk hunt by the time they figure out how to store firearms on the train! (Such a problem! Give me a good welder, some sheet metal, hinges, good lock and the problem can be solved in a few hours!)
They also need to add a couple of North South routes that create better connections. glg

Galen, I guess one of the small benefits of living in this urban area near SF is that we've got pretty easy access to the main Amtrak routes.

As far as how to transport the firearms, maybe I'm naive, but why not put the security of such in the hands of the passenger? Or just stow it with the other luggage. Seems to me that if someone wanted to cause some havoc on a train, they wouldn't need to bother with a checked bag. For that matter, they wouldn't need to board the train. The tracks are a heck of a lot more vulnerable.

Phillip,
I agree with the checked baggage. I am also working on an article for the next issue of The Review that will take a look at train travel for hunting writers. glg

Awesome stuff, thank you and keep coming with these, will be back again.